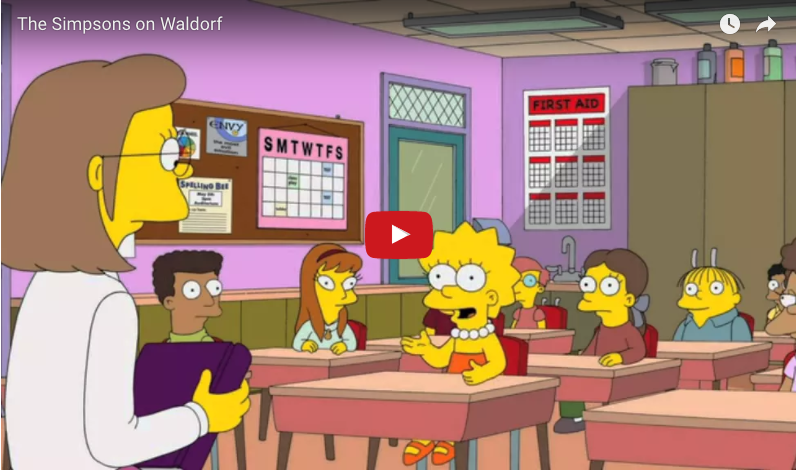 The Simpsons gave a comic shout out to Waldorf Education during their Season 26 finale for 2015 — “Mathlete’s Feat”, which aired May 17, 2015. The Association of Waldorf Schools of North America (AWSNA) was pleased with the level of in-depth knowledge The Simpsons writers clearly possessed about pedagogy and stereotypes associated with Waldorf Education, which made this fun caricature both lighthearted and flattering.

So how did Waldorf Education end up in an episode of The Simpsons? After Springfield Elementary School is bested in a mathlete competition, a well intentioned group donates servers, laptops and smart boards to the school so that students can better compete. Shortly after this tech revolution, there’s a massive server crash and teaching is at a standstill. This is when Lisa comes up with an idea that will save the school — “Learning while Doing.” Springfield Elementary becomes a Waldorf School! From there the students learn by doing — in Simpson-esque, tongue-in-cheek fashion, of course. By the end of the episode, their new Waldorf Education helps them win a mathlete rematch.

AWSNA was honored to have been featured in such a positive light in The Simpsons Season Finale and several Waldorf schools are responding with tributes to The Simpsons. A collective of handmade hats is being created to send to The Simpsons writers. The Waldorf School of Philadelphia is having students create beeswax figures of The Simpsons characters to share online and with The Simpsons execs.