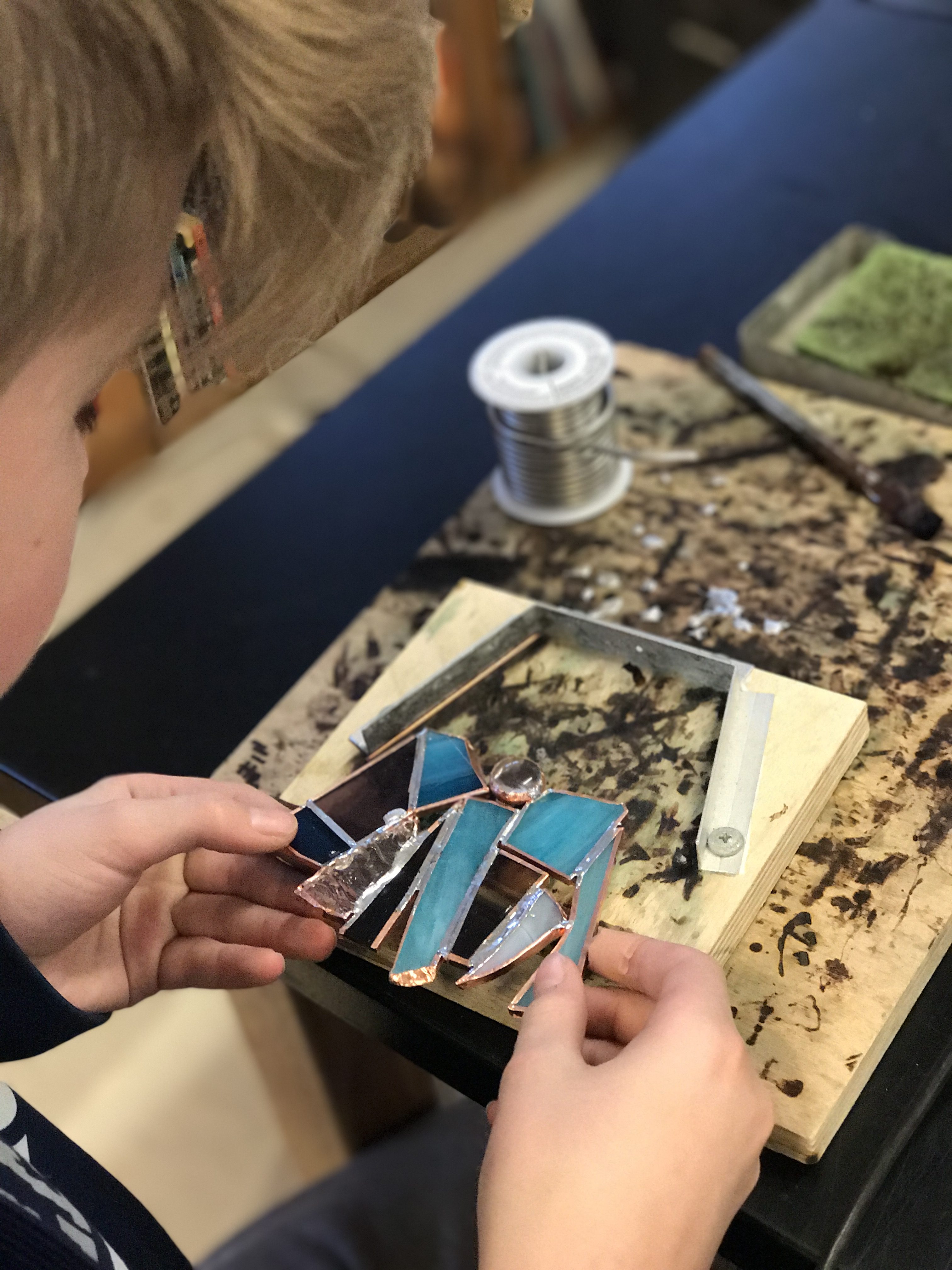 Last week, the eighth-grade classroom was transformed into an art studio as the eighth graders participated in a 12-hour per day workshop focused on the themes of three-dimensional geometry explored through glass structures. This unique workshop was led by Hans Schepker, an amazing artist, mathematician, and tailor originally trained as an electrical engineer in Germany. Many years ago, Hans came to the United States and trained as a Waldorf High school teacher specializing in math, and he has been offering this unique opportunity combining math and art to many Waldorf schools and other organizations around the country. Hans explained how this workshop developed by saying, “I like studying mathematical relationships that I can build.” Hans’s work as a glass geometer/sculptor inspires people to stretch their mathematical thinking in creative and unique ways.

Each day, Hans led the eighth-grade students in a main lesson focused on the exploration of three-dimensional solids in new and mind-stretching ways. The class also learned about the Platonic solids, three-dimensional shapes with congruent faces, each face being a regular polygon, and the same number of these regular polygons meeting at each vertex. There are five Platonic solids with these characteristics, and Plato, in an early iteration of atomic theory, believed that these five solids (cube, tetrahedron, octahedron, icosahedron and dodecahedron) were the building blocks of everything in the universe. In contemporary study, these solids provide a very rich foundation for investigating many facets of geometry in three-dimensional space and this geometrical exploration is often one of the highlights of the eighth-grade Waldorf math curriculum.

To study these forms and their rich foundation of geometry, Mr. Schepker started most days with an imaginative exploration of geometry. More specifically, students were led through the transformation of two-dimensional shapes into three-dimensional forms, first on paper and then later using glass to sculpt forms.

During one lesson students created a series of six drawings, freehand without any rulers or measurements. Each drawing started as a cube, and then corners were truncated according to increasing fractions of the edge to create new shapes. Ultimately, the series was an exploration of the transformation of a cube (six-sided solid) into a tetrahedron (eight-sided solid) and demonstrated why these two forms are termed “duals” or reciprocals. 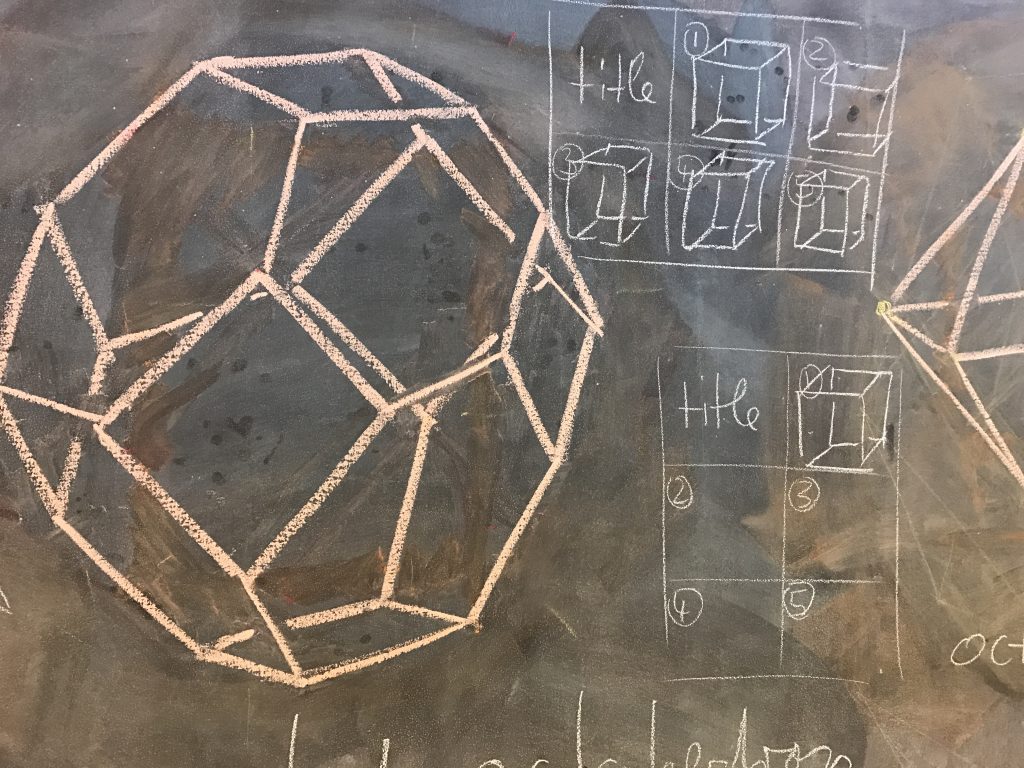 On another day, students participated in a writing activity in “poetry transformation,” an exercise originally done by a group of mathematicians who call this activity “N+7.” The group is called “Oulipro” (see examples of their activities). Other days were spent discovering further aspects of geometry through creations in glass. One evening students watched a documentary featuring Erik Demaine, professor of computer science at MIT, who applies origami folding techniques to science. In the film, “Between the Folds, Part I” he explores how one can learn about form in the world through paper folding.

During the week, students also read a book they had chosen from Hans’s library of books on all things mathematical and prepared a short presentation on their topic. On Thursday evening, after a delicious potluck dinner, students presented their topics and shared their creations with their parents.

By the end of the week, students had created many amazing forms out of paper and glass, both in two and three dimensions. They learned how to cut glass precisely, how to grind rough edges, how to prepare glass for soldering by carefully adhering copper foil around each edge, and how to solder using soldering irons that heat to 1000 degrees F. The students took up this work with enthusiasm and focus. Their first glass creations were candleholders and each piece was unique and jewel-like. A major project of the week was to build a glass lamp that will be given to the school as a parting gift at graduation. During the first day of the workshop week, the students collectively chose which geometric form the lamp would be and designed the faces. The lamp is a beautiful example of artistic, practical, and collaborative work. In this intensive workshop, the class had a unique opportunity to explore the intricate and precise beauty of mathematical forms through artistic expression. 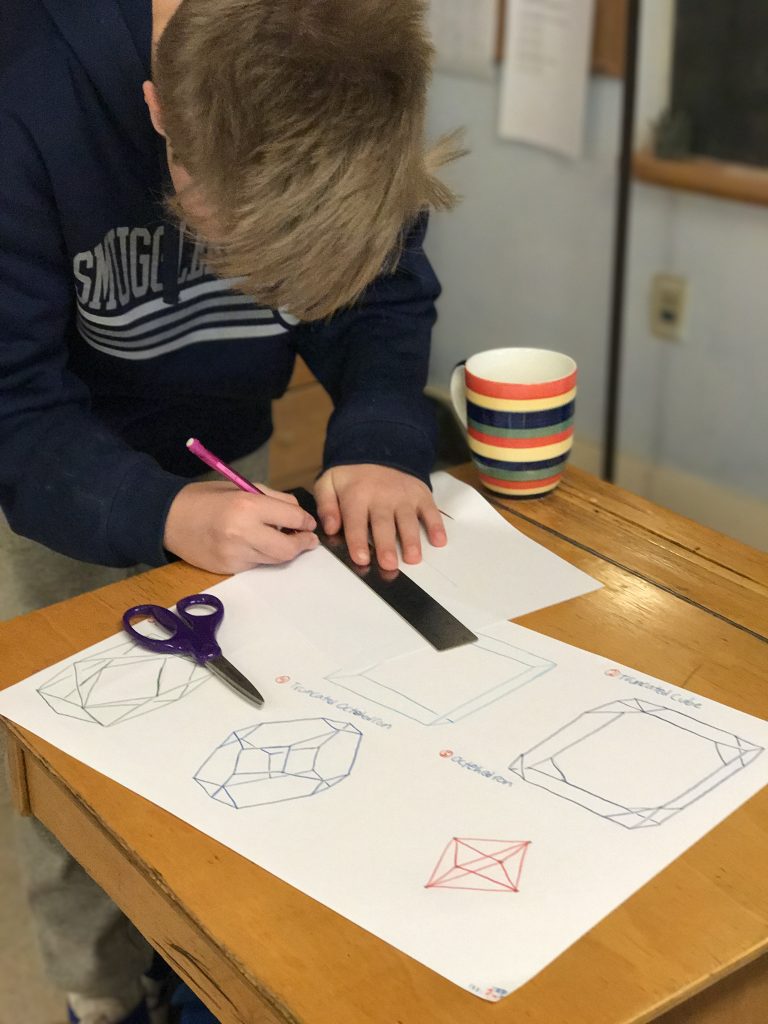 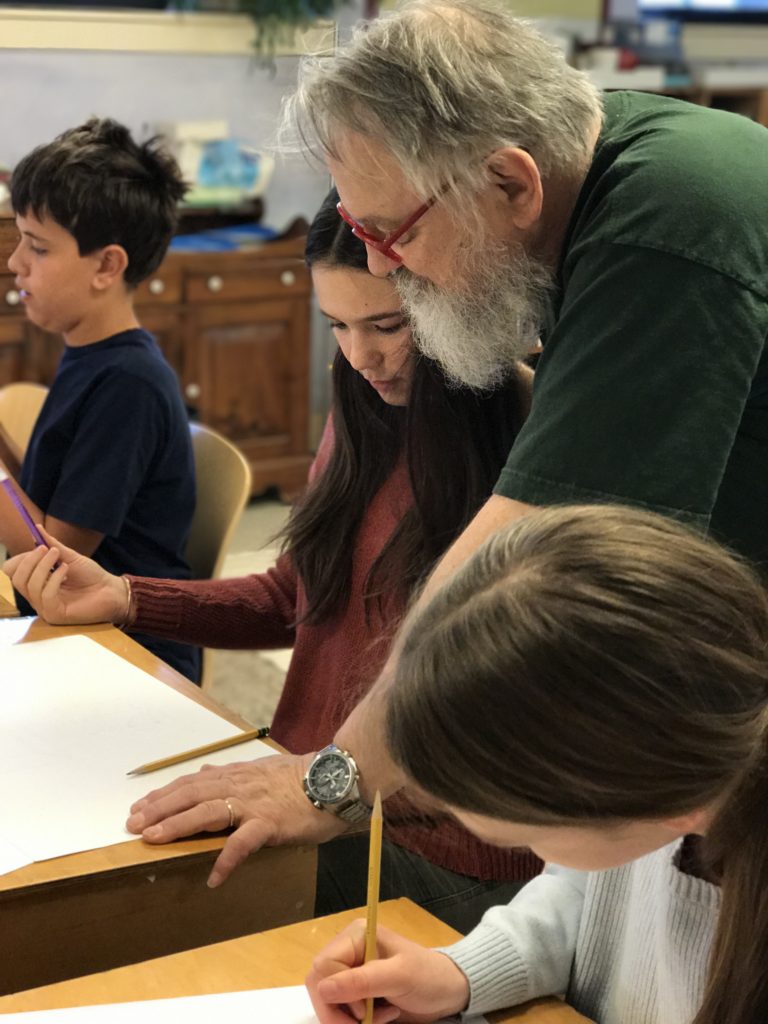 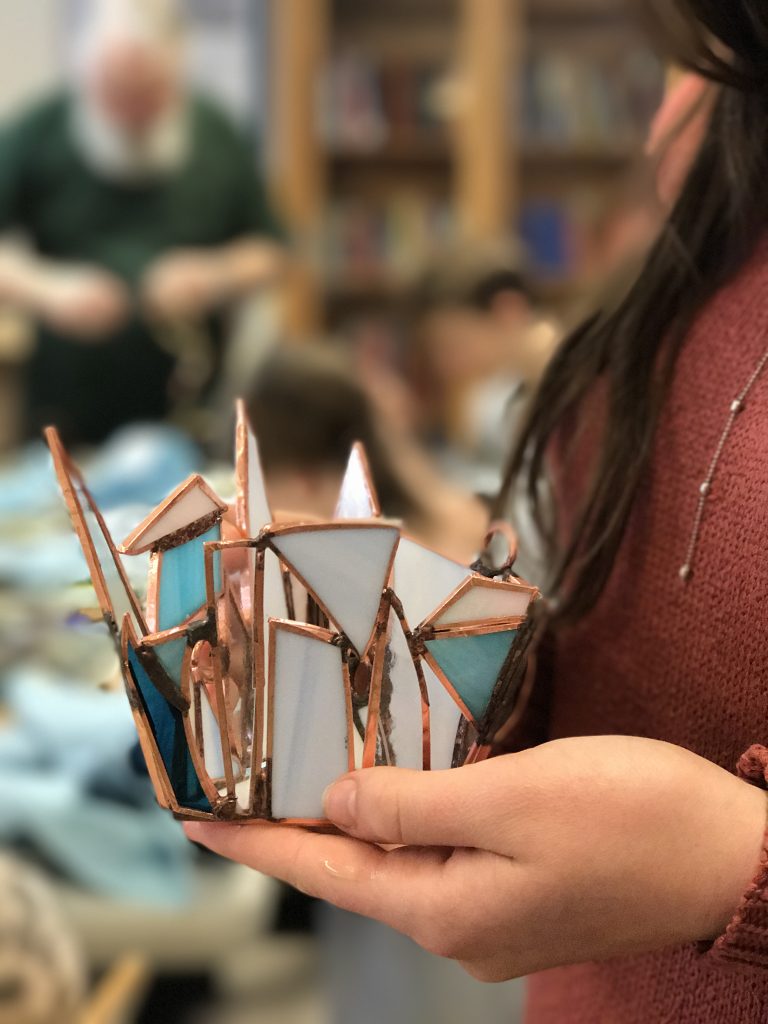 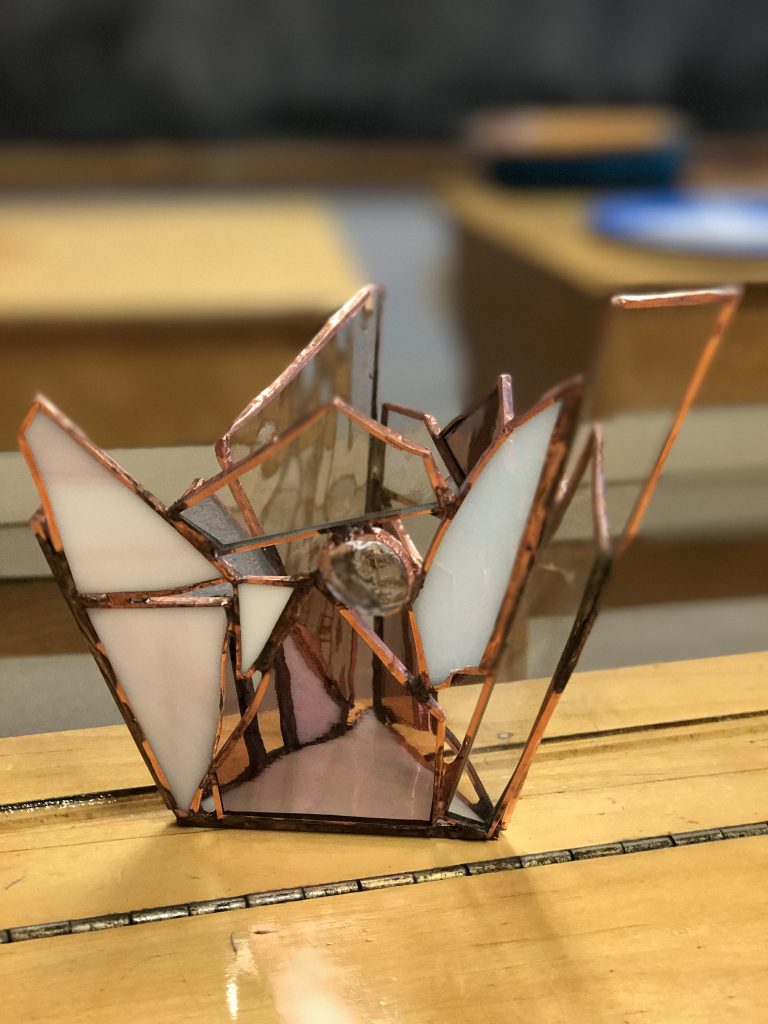 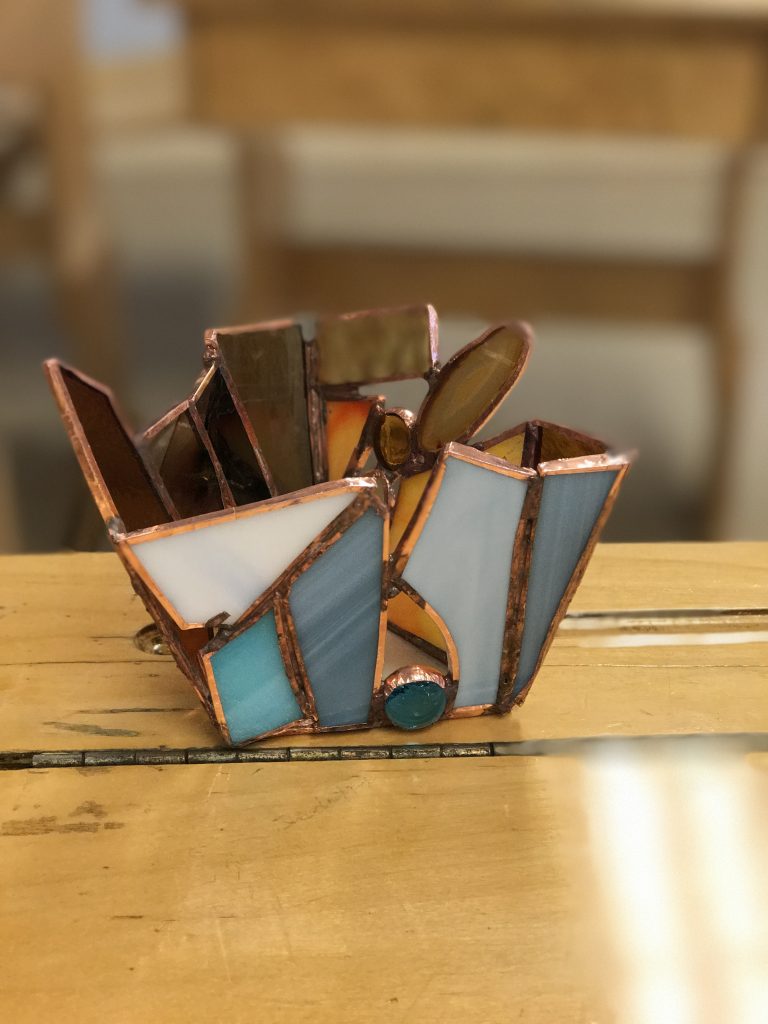 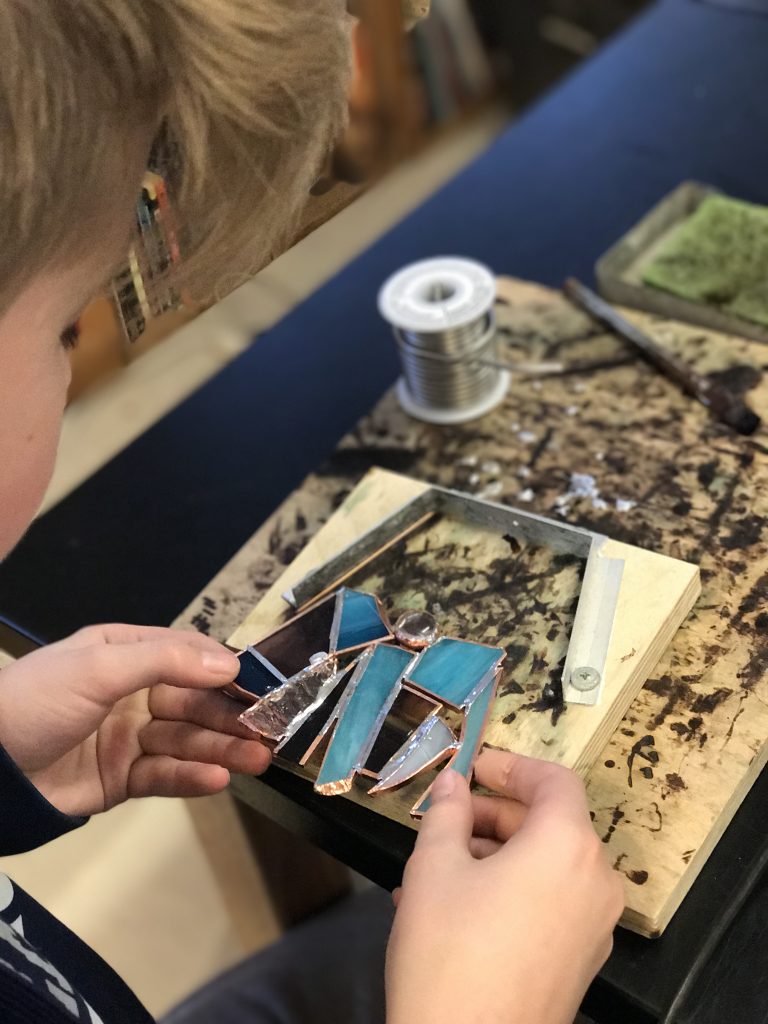