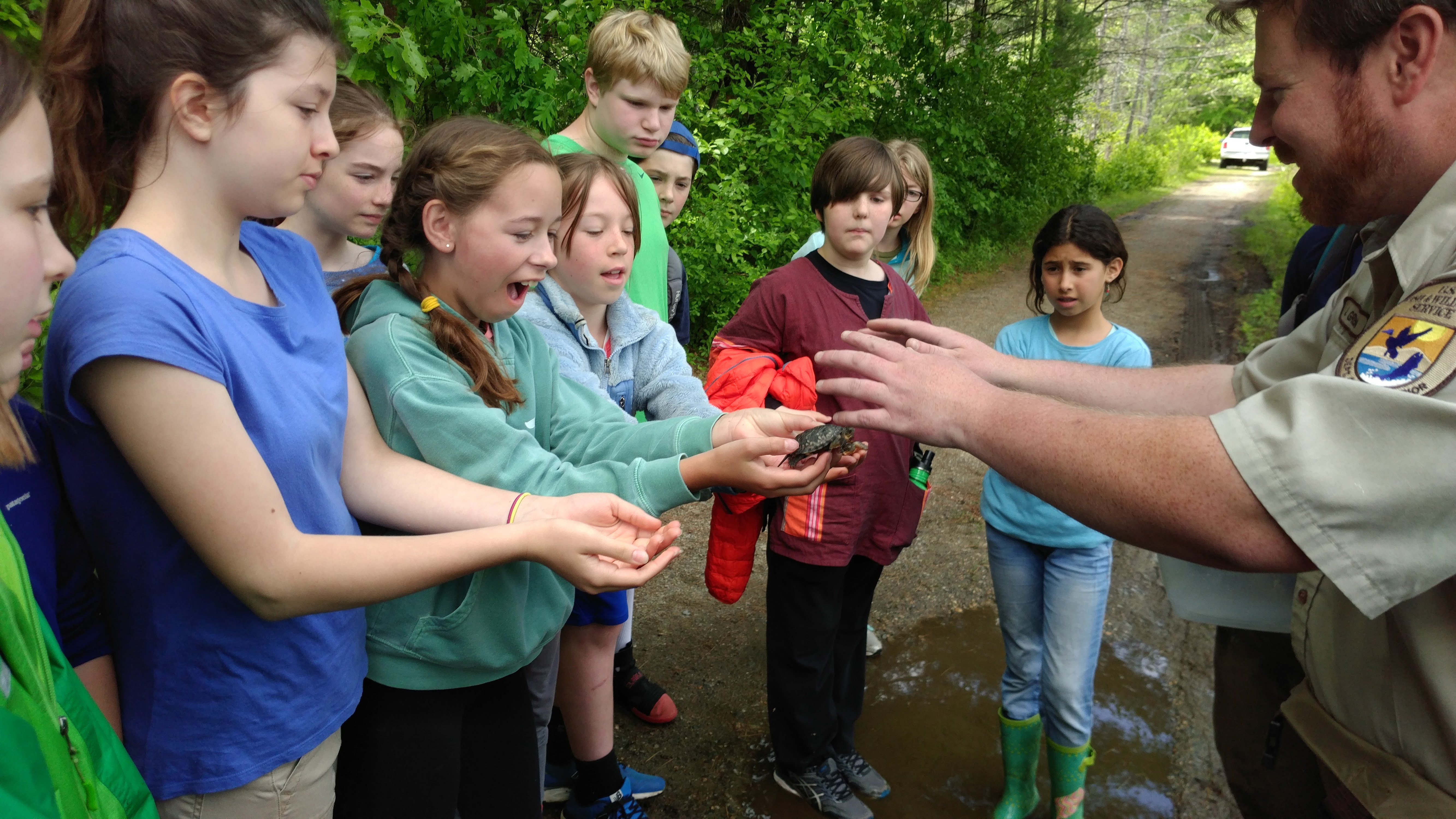 “In September of 2016, our fifth grade class received two Blanding’s turtles from Grassroots Wildlife Conservation (GWC). The turtles are an endangered species and the GWC asks schools all over the area to ‘head start’ the turtles to increase their chance of survival,” writes fifth grader Sierra Rullman in her recap of the turtles’ release day.

The Blanding’s turtle (Emydoidea blandingii) ranks near the top of the most threatened species of turtles in the northeastern United States, with an estimated population as low as 3,000 individuals in all of the United States.  In Massachusetts, where most of the northeastern Blanding’s turtles live, only three populations are currently known to have 50 or more adult turtles, one of which is the Assabet River National Wildlife Refuge in Sudbury.  Blanding’s turtles are known to live 70 to 80 years and can get as large as a football.  They eat crayfish, worms, aquatic insects, tadpoles and more.  This conservation program, the turtle head start program, has proven to increase Blanding’s turtle survival rate from around 1-5% to about 70-80%.

The Time Has Come – Release Day

“After eight and a half months of feeding and providing care to the turtles, it was time to release them.  Myrtle and River had grown from the size of a half dollar to the size of a clementine and their weight had increased significantly as well,” said fifth grade student, Sierra.

On June 3, 2017, the fifth grade class traveled to Assabet River to release their class pets back into the wild with the help of Emilie, a researcher at Grassroots Wildlife Conservation.

“I had been anticipating, but regretting the release day. I held the turtles on my lap (in a container) almost the entire way there. When we got there we met Emilie from GWC. She took us to the refuge and right away we saw a great blue heron take flight, a garter snake and several frogs,” remembered  Sierra.  “When we arrived at the Assabet River National Wildlife Refuge, we were all excited to see the many different animals.  We saw a lot of amazing animals, including rare turtles with colorful shells,” recalls fifth grade student, Gael.

Emilie and one of the U.S. Fish and Wildlife Service staff, Jared, praised the students for their efforts, saying the turtles were on the larger side compared to many of the other 1,000 they had released this year. They watched Jared make his way through the overgrowth to a spot where the turtles could thrive.  As the children waved goodbye, they began singing to them:

May the longtime sun shine upon you

All love surround you

And the pure light within you

After the release of the turtles, Emilie took them on a walk to learn about other wildlife in the area.  She took live traps out of the water that had been set earlier that morning and was able to show the children painted and spotted turtles up close and share a great deal about them, like how to find out the sex of a turtle. They also had an amazing experience of discovering a turtle nest.

“After hiking for some time, we came to a snapping turtle nest, but we could see that it had been dug up by one of the many predators of turtle eggs–a raccoon.  Sadly, there were seventeen eggs that had been destroyed and the shells remained wet with yolk.  Fortunately, most turtles lay 50 to 60 eggs at once, so Emilie gently dug through the nest revealing 44 more undisturbed eggs!  She held one of them up so we all could see it.  I thought it was fascinating.  It was the exact size of a ping pong ball–a perfect sphere.  When she held it up to the light, it glowed slightly orange from the yolk inside.  She took a container from her backpack and carefully laid the 44 remaining eggs inside.  One thing I thought was very interesting was that you had to keep the egg in the exact same position that you found it in the nest, otherwise the turtle forming inside would be killed because the embryo is attached to the wall of the egg and if disturbed, it will detach.  Another thing I found unique was that the eggs that are surrounded by temperatures of 80.6 degrees and above will all be female and eggs 80.5 degrees and below will be male. I think Emilie’s job is very inspiring and hope one day I can do something similar,”  Sierra shared.

“To set our turtles free was sad, but we were delighted to achieve success in raising them.  I think this experiment was very rewarding to see the vulnerable become strong. I wish to do something like this again in the near future,” shared Gael.

This experience was a great collaboration between Grassroots Wildlife Conservation, the school’s Science in Nature program and some dedicated fifth grade students and families. The students did a fantastic job of caring for the turtles–giving them an increased chance of survival!