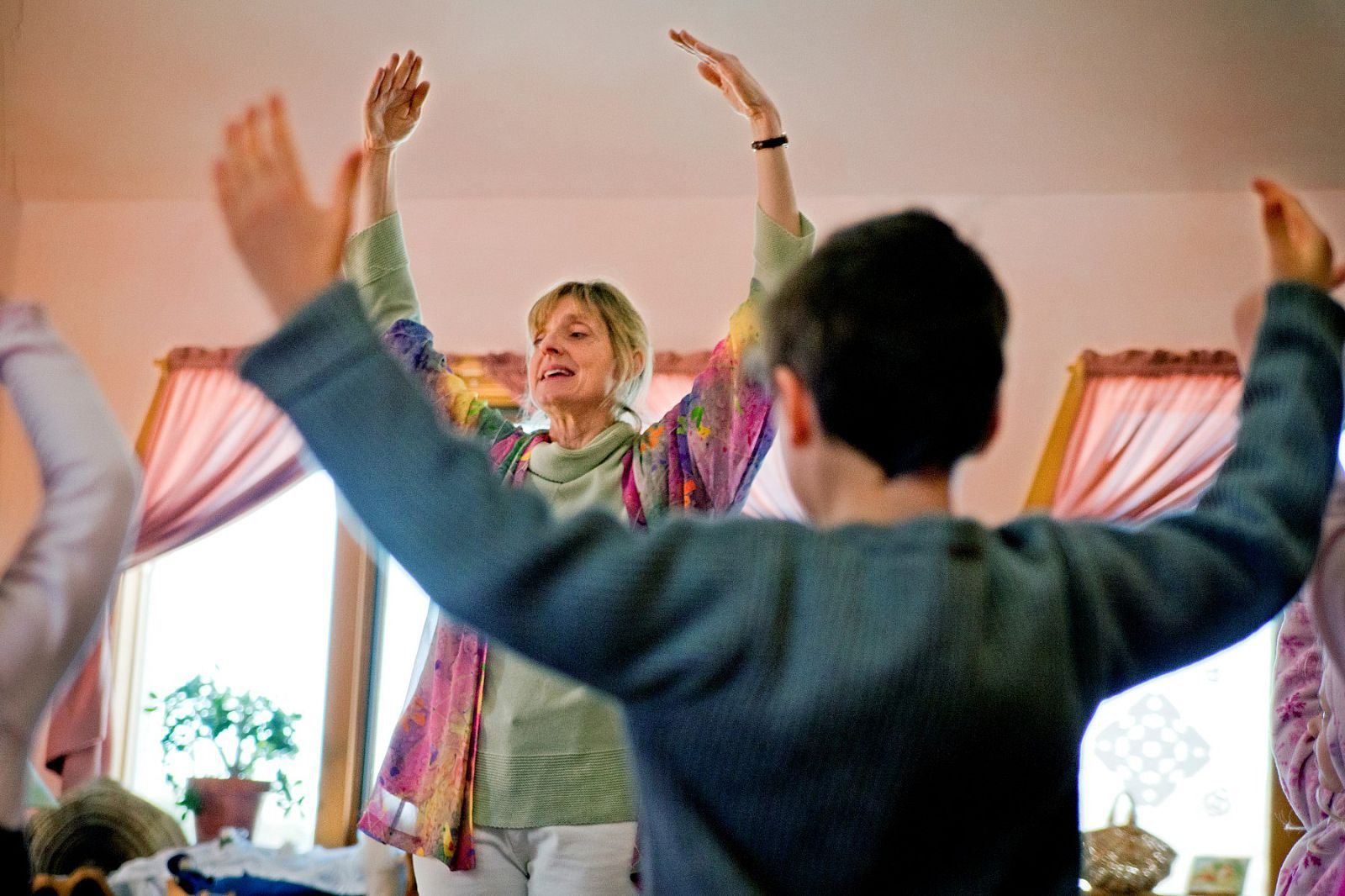 Eurythmy is an art of movement essential to Waldorf education. Accompanied by live instrumental music or by the human voice in spoken poetry and tales, eurythmy has been called “visible song” and “visible speech”. It was brought into being by Rudolf Steiner as a performing art in 1912, and within a decade had evolved into an educational art and a healing art as well.  In eurythmy lessons, each child at a Waldorf school learns to become attentive to the variety of sounds, rhythms, and images in a poem or piece of music. They are led in differentiated arm movements that express the inner feeling and creative force of the vowels and consonants or the tones and intervals. Moving through the room with others in choreographed geometric or asymmetric forms, the participants also focus on conveying the rhythm, phrasing, and dynamics of the piece.

But why do it?

Eurythmy both requires and develops focus and goodwill. There is power in listening, imagining, and moving together, with the shy ones overcoming their reticence, the loud ones their desire for attention, the slow ones their inertia, and the assertive ones their desire to be first. Everyone can generously become part of something bigger, and in so doing, find balance.

Mobility in space can arouse mobility in thinking and vice versa. Arm and leg movements such as those that cross the medial, horizontal, and frontal planes can help the children to establish a sense of space in themselves (and of themselves in space) and a clear foundation for mathematics. In the early grades, eurythmy forms are generally done moving forwards (walking, running, skipping, galloping, tiptoeing together in a circle or another basic geometric form), as the story or music suggests. Around fourth grade, the students become independent enough to face the front of the room with an awareness of the unseen space behind, as they move in a variety of directions on individual parts in a group form. And later, as adolescence approaches and the students gain the capacity to flow more freely on curvy, angular, or complex designs, the space around and between the performers becomes more “alive” and important.

Creating moving forms with others in time and space requires visualizing the whole field as it continually changes. With practice, even students who initially falter or feel a little confused can learn to picture the form and to find their way. A form drawn on the blackboard can be read and followed as a map and timed with what is heard. As the forms become more complex with various individuals or groups going separate ways (portraying the melodies and harmonies in music, for instance), the students must truly think on their feet or they let their peers down. Both beginning and advanced musicians benefit from learning to listen actively and move in the ways that the music moves. With live (generally unamplified) music, they are not propelled by a loud and repetitive beat but must enter into a more subtle musical experience. No one can be a passive bystander.

Gradually, imitation and memorization in beginner’s eurythmy evolve toward individual creativity. Archetypal eurythmy movements can be stylized to differentiate moods, colors, historical epochs, natural elements (earth, water, air, fire), human soul forces (thinking, feeling, willing), grammatical elements, and musical styles. An active student will notice what lies behind a gesture, its direction, and energy, as well as what it communicates. Focusing on artistic feeling as expressed by a poet or composer can help young people to reach beyond their personal moods. As in every art, the capacity to notice subtle qualities gives rise to a more awake viewpoint, a more “objective” use of feeling. In a world of peer pressure, advertising, and politics, we strive to enable each student to meet outer life with an active inner life, including capacities for listening and observing, for understanding, for visualizing, for thinking ahead, and for intuitive discerning.

In all things, Waldorf Education aims to protect and activate human potential. Along the way, we take full advantage of the windows of opportunity that each stage of childhood offers. There is a very real synergy between the subjects of study in the curriculum. By having eurythmy lessons from kindergarten on up, language arts such as speaking, writing, and reading are mutually enhanced. The fine motor skills of handwriting and drawing at any age are improved through the variety of full-bodied movements practiced in eurythmy. (These have a very different effect on a person than does repetitive typing!) And although the younger students through second grade are not explicitly told that their eurythmy gestures correspond to sounds, they happily live in the imagination and imitate the movements while hearing the language. Many a young child later enjoys repeating certain vowels or consonants (or even replaying whole stories on their own) because a strong feeling has arisen for the sounds. Not only children with speech and auditory difficulties can benefit from this heightened expression of speech, but also every student advancing through the grades. Over the years, it helps to enrich their writing skills and their appreciation of the writings of others. It also enhances their acting and public speaking abilities.

Doing eurythmy with writings from diverse times and cultures deepens the study and appreciation of history, peoples, and languages. If pieces are selected and choreographed in relation to each grade’s curriculum, one may begin to get a glimmer of our evolving human consciousness. These excerpts may be integrated into class plays or performed in a foreign language.

Eurythmy has an overall harmonizing effect on a participant’s health and vitality. The movements are often flowing and rhythmical, drawn forth, and enhanced by the power of imagination. For instance, if the group is creating an expanding and contracting circle with William Blake’s words, “To see a world in a grain of sand, and a heaven in a wildflower”, they may imagine the stars behind their backs drawing them outward, and a grain of sand or a small flower drawing them forward and in. Some can begin to sense the flow of life force that extends beyond their physical bodies and connects them to each other and to the world. By rhythmically timing the movement together, neither stuck rigidly within themselves nor dissipating their energy and attention too far into the periphery, a healthy, breathing alternation is achieved.

Exercises done with a 30” copper rod is another supportive eurythmy activity. Copper conducts warmth, as well as electricity, and the exercises can help extend and align this flow of energy. Improvements in posture and coordination come naturally.

For students with health or learning challenges, (physical, emotional, and developmental), parents may pursue private sessions in eurythmy therapy. In these sessions, vowel and consonant gestures are intensified to produce specific therapeutic effects and healing forces in the participant. Individually prescribed and practiced, the right series of movements can help bring ease to the participant.

Doing eurythmy together is a powerful nonverbal exercise in social and spiritual awareness. In the live presence of classmates with an accompanist playing music and a teacher reciting poetry, there is a deep reality to be explored which is not “virtual.” For each student, opportunities abound to go through that door with energy and concentration, heart and soul, and receive what eurythmy has to offer. It is a free decision. And a beautiful thing to see them strive for it together!