“Enjoy screens. Not too much. Mostly together.”

In early September I attended the “Humanity + Tech”  conference at the MIT Media Lab. It featured Joi Ito, the director of the Media Lab, Glen Murphy, the head of user experience at Google, and even Bo Burnham, the director of the movie “Eighth Grade”. In addition, a long list of scientists, journalists and thinkers joined the conference. I attended this important conference to investigate how closely the topics would parallel the ideas we cover in Cyber Civics class. In addition to sessions on the rise of artificial intelligence, how social media is changing our culture, and the proliferation of misinformation and fake news online, a significant portion of the conference focused on finding balance between our time spent on screen and everything else in our lives, which just happened to be the theme of the first unit we covered in the seventh grade class—“Learning Balance.”

One fascinating part of the conference was when a group of high school students representing the Boston Debate League presented a policy debate on the notion, “Have smartphones destroyed my generation?”. This debate was in response to an article in The Atlantic last spring with a similar title.  The students examined the pros and cons of smartphones from an academic standpoint. They cited the downsides of this technology as a major source of distraction that makes time management more difficult.  They also noted that smartphones and technology can interfere with sleep, intensify symptoms of anxiety and depression, and even prevent teens from “putting themselves out there” in the real world. However, on the upside they reminded us that mobile devices help us connect all over the world and empower young people in a way we’ve never seen before.  And all the students said they use their phones to read books and research, and love that they have access to essentially an infinite library through the internet. In the end, both sides concluded that moderate usage is the best answer.

This is exactly the same idea that inspired developer Kevin Holesh to create the app “Moment” after he realized how much time he was spending on his phone.  Now millions of people are using this app to help moderate their own phone usage. Data from the technology sector and research from academia now suggest that the key to a happy relationship to our devices comes from moderating our usage. Here’s what Mr. Holesh found from his users of the “Moment” app: 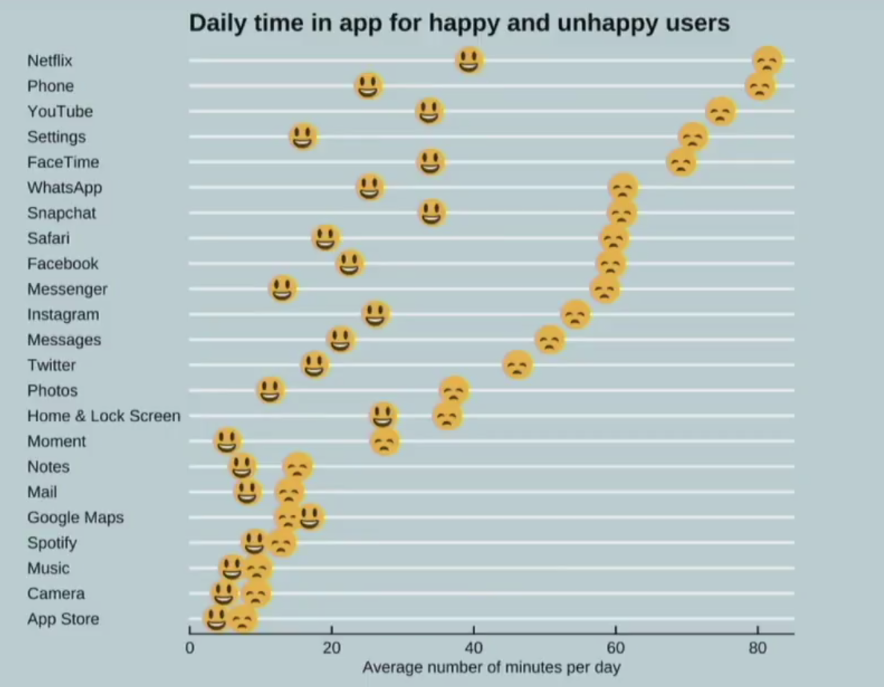 In just about all cases, more time spent on an app, the less happy users are.   Anya Kamenetz, NPR education correspondent and author of the book “The Art of Screen Time” sums up these findings this way: “Enjoy screens.  Not too much. Mostly together.” Her research suggests that so long as we are mindful about the content and use screens as an opportunity to interact with each other—such as looking up something interesting together or even watching a movie as a family—that we can make good use of these tools.

In our seventh grade class, we tackled all these ideas in a two-part lesson, “Your Digital Diet.”  The students’ first homework assignment was to track how they spent a full day over the weekend, and when they returned the next week, we added up all the time spent in different categories to examine how much time was actually spent on screens.  As you can see, while we as a class did find a way to balance our time, screen use still made up a significant portion of our time.

However, considering the average teenager in the United States spends 8 hours and 40 minutes in front of a screen (vs 9 hours 22 minutes for adults), our class actually is well below that at about 3 and a half hours per student on average.  Of course, the amount of screen usage varied quite a bit from student to student, but they chart very well as a whole.

For the second part of the lesson, I assigned the class to take a “24-hour Digital Media Vacation” over the following weekend and write a paragraph about the experience.  We discussed how it went during the next class, and several students said it was very difficult to stay off devices entirely for a full day, especially since other family members were on them.  A couple of students reported getting some “second-hand TV” when walking into a room where someone was watching a program. Another had to write an email and found herself on YouTube out of habit afterward, and had to stop herself.  Yet another student pointed out that she found herself wanting to use devices more intensely than she normally would simply because she couldn’t use them.

What about this question of digital “addiction”?  Are these devices actually creating addictive behavior? Research is still unclear, but without a doubt, our technology is definitely habit-forming.  Author Nir Eyal, an expert in “persuasive technology” and the author of “HOOKED: How to Create Habit Forming Products” argued that using the term “addiction” was excessive, but even he agreed that we have to take steps to prevent forming bad habits with our tech.  He points out that developers and marketers use our emotions to try to “hook” us into using their products more often by tapping into our hidden fears and desires—something that advertisers have been doing for over a century.

He suggested we do the following things to help moderate our usage:

A few other suggestions from the MIT conference were:

I gave many of these suggestions to the seventh graders as “Pro Tips” in part because they were given to me by the real pros at the “Humanity + Tech” conference.  I hope these can be useful for you and your own family. I was gratified to find important thinkers, engineers and scientists grappling with the same ideas and issues we face in our Cyber Civics classroom, including future topics on social media, information literacy and even artificial intelligence.

In addition to all this wonderful information, I had a chance to converse with a number of other attendees, and upon explaining my work as a Cyber Civics teacher their response was surprise and delight that such a program exists. I got into a lively discussion about the program with a professor of psychology, and a Harvard student I spoke with who said, “I wish we had something like that when I was in high school.”