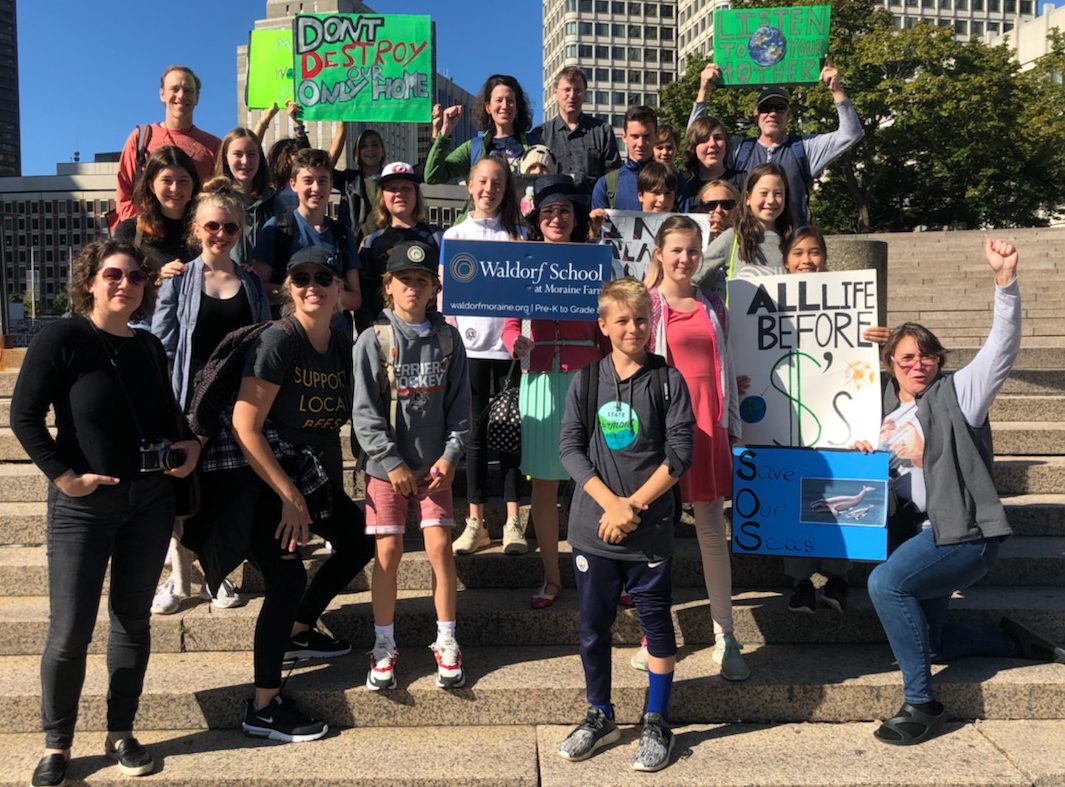 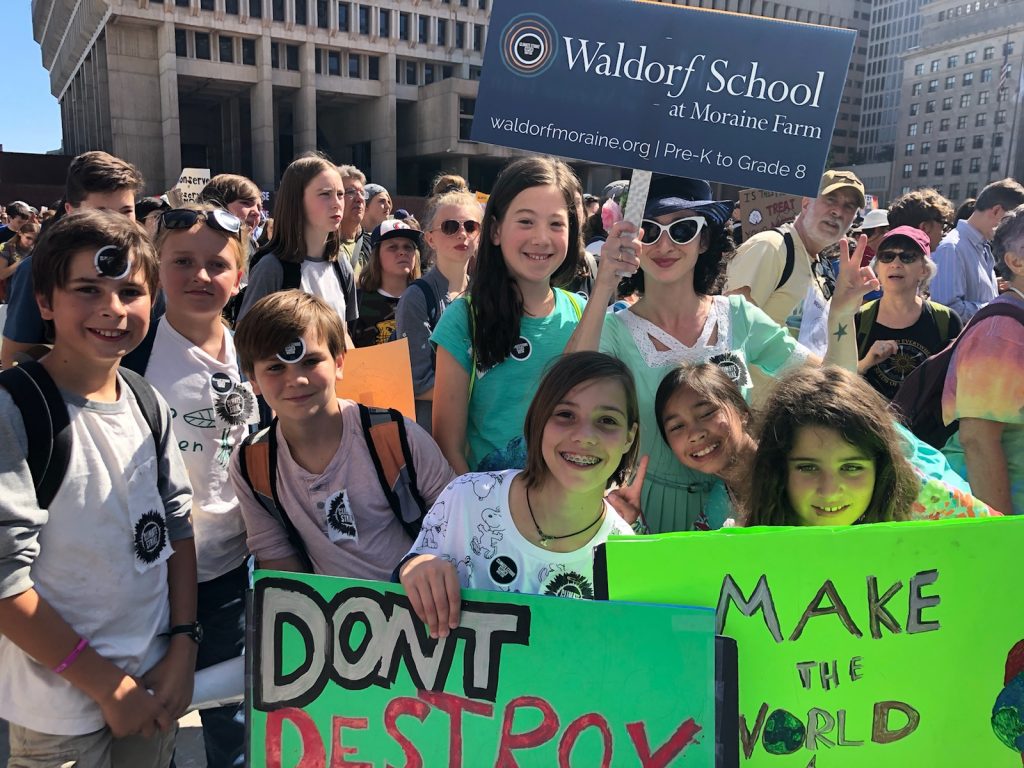 As part of the Sixth Grade Language Arts class, students wrote about their recent experience attending the Boston Climate Strike on Friday, September 20, where an estimated nine to 10 thousand people converged on City Hall Plaza. This exercise served as a warm-up to a journalism unit the class will engage in during the winter. Some students chose to work together, while others preferred to work alone. This exercise was voluntary. Below are their words.

On Friday, September 20th, eight chaperones and the sixth, seventh and eighth grades at Waldorf School at Moraine Farm attended the Climate Strike at Boston City Hall Plaza. Over one thousand people were estimated to be there. It was packed. To get anywhere we had to swim through crowds of noisy protestors. Most students went because they simply had to, but others went because climate change affects the economy, farming and fairness to all people. The group departed from Beverly Depot and arrived at North Station. Then we walked the rest of the way to City Hall Plaza. On the way to City Hall Plaza, one of the eighth graders asked me for my sign, and as we walked, he held it up and people honked and smiled at us. My sign said “Don’t Destroy our Only Home.” There were lots of good signs, but the one that stood out to me was “I, too, Enjoy Breathing.”

At the rally, there was a stage to the far right in the corner of the plaza. At the back there were tables with red canopies. One table had first aid, another had free food and water, and a third had pins and stickers that support climate justice. The group mostly stayed at Boston City Hall Plaza, which was our destination. The march itself went to the Massachusetts State House. At City Hall Plaza, each chaperone took a group of three to four students and walked around looking at the tables and signs. We also went to find better places around the rally to hold up or own signs. Sometimes we would see teenagers leading mini-marches in a circle in the crowd. It looked like a fast-motion video of ants making pathways underground.

Waldorf School at Moraine Farm students went to the rally for many different reasons. Eighth Grader Alexandria Kennedy said she went because she “wanted to make a difference.” Eighth Grader Atticus Anderson said he wanted “to raise awareness” and Eighth Grader Oliver Zohn said he felt “it was necessary for the world to change.”
“It is important to engage in public experiences,” said Sixth Grade Class Teacher Ana Coffey, “It was a youth climate change, and it’s important to engage in activism.” Sixth Grader Velia Wrinn said she went because she feels strongly about “people and the earth staying alive forever.” Caroline Horner, former Interim Head of School and parent of a sixth grader and an eighth grader, said, “It’s important to stand up for our planet that supports us.”
Students remembered many different parts of the trip. Eighth Grader Connor Carrington-House said seeing how many people care about climate change was his most memorable part. Sixth Grader Nick Thorn loved the polar bear costume he saw. Eighth Grader Abraham Andrews said seeing the many different ways art was used to make statements through signs, backpacks or outfits was memorable to him.
Students and chaperones learned that climate change is important. “When we gather together, we can accomplish great things,” said Horner. Anderson said “I learned that people are very driven by this,” and Seventh Grader Satchel Rubin said, “I learned climate change is a big deal.” Zohn said he learned that “it was a big deal more than I imagined, especially since the earth can be permanently damaged in eleven years.”

Since the rally, we have been thinking about what we can do now to protect the climate and prevent permanent damage to the earth. Sixth Grader Aurora Chamberlain said, “I would like to go to more climate marches, pick up trash, recycle things and compost more items.” She also said that she intends to “buy less polyester, not support fossil fuels, and eat less meat.” Nick Thorn, another sixth grade student, said he will “turn off the lights!” Sixth Grader Marisa Seibert said she will “make her garden bigger in order to not use as much gas driving to the grocery store.” Gillian Horner, another sixth grader, said, “I will not support the plastic industry by not buying plastic materials.”
Other ideas were carpooling, starting a shuttle bus to and from school, and putting solar panels on the school building that are directly attached to the school grid and not to National Grid. Reducing the amount of waste was another idea. A simple way of reducing waste, for example, would be to bag up and remove trash bags only when they are full instead of bagging up and removing half-empty trash bags. Since the rally, we are ready to help our climate and put these ideas into motion.